All Collections
FleetMon Maritime Knowledgebase
What is The Vessel's Bell for?

What is The Vessel's Bell for?

Each ship has a bell already at launching. The size is prescribed according to the size of the ship. It is used to signal distress and fog. In case of fog or when the ship is stuck on a sandbank, the ship rings the bell to draw attention to the emergency incident. Depending on the situation, the beats used as signals vary:
If a ship is at anchor with reduced visibility, the bell is rung every minute for 5 seconds. If a ship ran aground, three additional choppy sound blasts must be given before and after.

Ship bells are collected in many maritime museums. Particularly famous is the ship's bell of the TITANIC, the passenger ship that sank in 1912. The bell was lifted from a depth of 3,800 meters. Another famous ship's bell is that of the frigate LUTINE, sunk on October 9, 1799. The bell is located in the foyer of Lloyd's London, the first and largest marine insurer in the world. It is rung for every ship insured by Lloyd's that has been in distress and sunk. 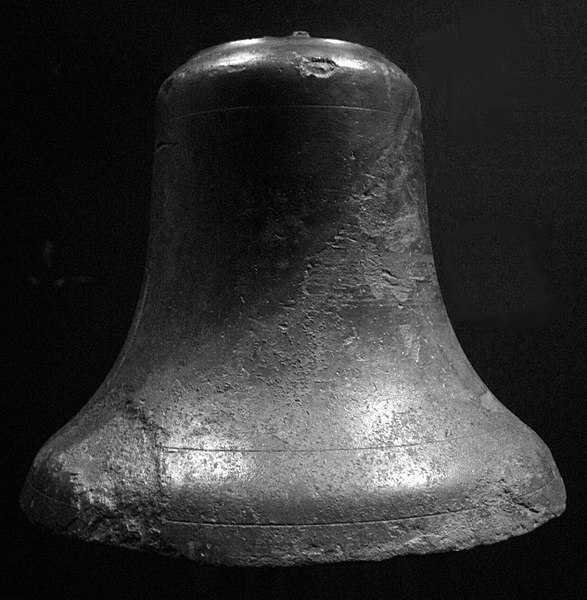 The name Glasen for timekeeping on seagoing ships derives from the glass hourglasses (hourglass) that were used to tell time on board before the invention of the chronometer. These were a half-hour glass and a four-hour glass. The passing and turning off the half-hour glass as indicated by striking the ship's bell, the number of strokes being equal to the frequency of the turning. This counting went to eight, corresponding to one watch, and then began again with the turning of the four-hour glass.

If you hear four double strokes, i.e. eight glasses, it is time for the change of watch on many ships. Two to three watch shifts take turns at work. On German ships, three watch shifts are traditionally run. Four hours on the watch are followed by eight hours off watch.

Eight glasses for the end of a watch is also considered in seafaring as a symbol of the transition from life to death, which is why this term and the fourfold double strike of a ship's bell are often used for the death and burial of a seaman and for commemoration.

There is no tolling of the bell on ships lying in port. But there are exceptions: The Kieler Woche (Kiel Week), a traditional German sailing event, is started annually with the eighth stroke of the Gorch Fock's glass on the penultimate Saturday evening in June.