Strait of Hormuz: The Chokepoint for Global Oil Demands 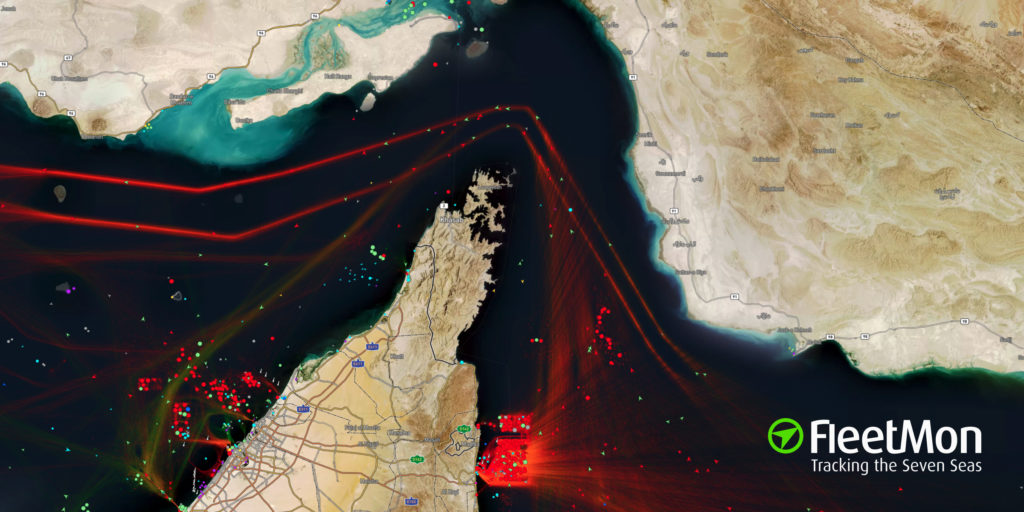 Sandwiched between the Persian Gulf and the Gulf of Oman, the Strait of Hormuz is the only sea passage connecting the Persian Gulf to the open ocean. In other words, it is the lifeline of the Arab world, the most notable among them being Kuwait, Saudi Arabia, Bahrain, Qatar, and the United Arab Emirates. Although the narrowest point in the strait is just 33km wide, the shipping lanes in both directions are only 3km wide.

If you’ve been following maritime incidents, you’d know that this Strait is in the frontline when it comes to the battle between Iran and the United States. So much so that the United States Fifth Fleet, based in Manama, Bahrain, is responsible for protecting maritime shipping lanes in this region.

The 39km strait is the only route to the open ocean for over one-sixth of global oil production and one-third of the world’s liquified natural gas (LNG). This precise reason makes it one of the most volatile maritime regions of the world, and rightly so.

The Strait is a logical flashpoint for geo-economic gamesmanship for major OPEC countries due to its location and strategic value for so much of the world. According to the U.S. Energy Information Administration, in 2011 alone, an average of 14 tankers per day passed out of the Persian Gulf through the Strait carrying 17 million barrels (2,700,000 m3) of crude oil. This represents around 35% of the world’s seaborne oil shipments and 20% of oil traded worldwide. In 2018, 21 million barrels of oil passed through the strait in a single day- meaning $1.17 billion worth of oil a day. It carried about 21 million barrels a day – more than the 17 million barrels a day that went through the Strait of Malacca, a major international waterway in the Indian Ocean.

To put that in context, the amount of oil passing through the Strait is approximately double the total oil output of the United States – even computing for the recent boom in US output that resulted in it becoming the world’s largest oil producer, all thanks to fracking of oil. And the amount of oil that passes through the channel is staggering, with roughly 80% of the crude it handles destined for Asia powerhouses like Japan, India, South Korea, and China. The world’s global economy could not function without that supply of oil lubricating it. Fluctuation in oil prices, especially when it goes up, drastically affects several other industries. History remembers well the oil shock of 1973 when Arab countries cut off oil supply and created shortages and rising prices around the world. In the US itself, the price of oil was driven up by 400%, driving many other sectors to near bankruptcy, with general Americans and Europeans facing the heat of the crisis. They say history itself is the biggest teacher. This has provided us with new challenges when it comes to stabilizing existing trade routes, especially those having a lot of tanker activity in it. At its narrowest point, the Strait is only a mere 21 miles wide. And that’s not just it! The shipping channels that can handle massive supertankers are only two miles wide heading in and out of the Gulf, forcing ships to pass through Iranian and Omani territorial waters. 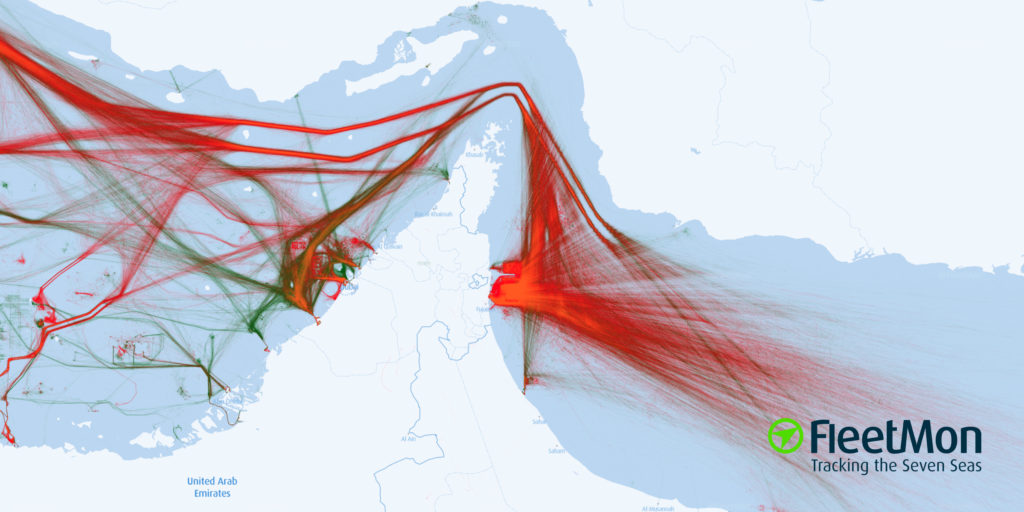 The US sanctions against Iran have been in place since as early as 1979, shortly after the Islamic Revolution in Iran. The sanctions have been taken out with negotiated deals between the two governments, but things stepped out of hand in 2006. Iran refused to comply with UNSC Resolution 1696 which demanded that Iran halt its uranium enrichment program, forcing the US to impose sanctions on those dealing with Iranian companies, especially in the oil and gas sector. This extended to tanker seizures that have been continued to date. FleetMon reported on the latest incidents in our Maritime News section. And when I say tanker seizures, it includes both the parties involved. Usually, someone takes the first step and the other follows suit as a retaliatory measure. In July 2019, responding to Britain’s role in impounding an Iranian supertanker, Iran seized a British flagged oil tanker, Stena Impero. After nearly 2 months of negotiation, the ship was finally released in September. Several other events, like US forces destroying an Iranian drone that came close to the USS Boxer and two tankers – the Marshall Islands-flagged FRONT ALTAIR and Panama-flagged KOKUKA COURAGEOUS (renamed to SAKURA ADVANCE) were being damaged by explosions after leaving the Strait of Hormuz has turned the region into a hotbed of increasing geopolitical tension amongst the countries of the Gulf. Recently, the US Treasury Department announced sanctions on Iran’s Ministry of Petroleum, the National Iranian Oil Company, and its oil-tanker subsidiary for providing financial support to Iran’s Islamic Revolutionary Guards Corps, the elite military unit, that is designated as a terrorist group by the United States. The Iraqi invasion of Kuwait in the 1990s stopped oil exports from both countries and doubled the price of oil at the time for the global market, keeping them elevated for a year. Today, if something like that is to happen in the vital Strait, these effects would be mitigated somewhat by strategic oil reserves that can make up supply shortfalls for months. But global oil prices would go up for sure, given the fact that major OPEC countries can’t make their oil accessible to the global market. 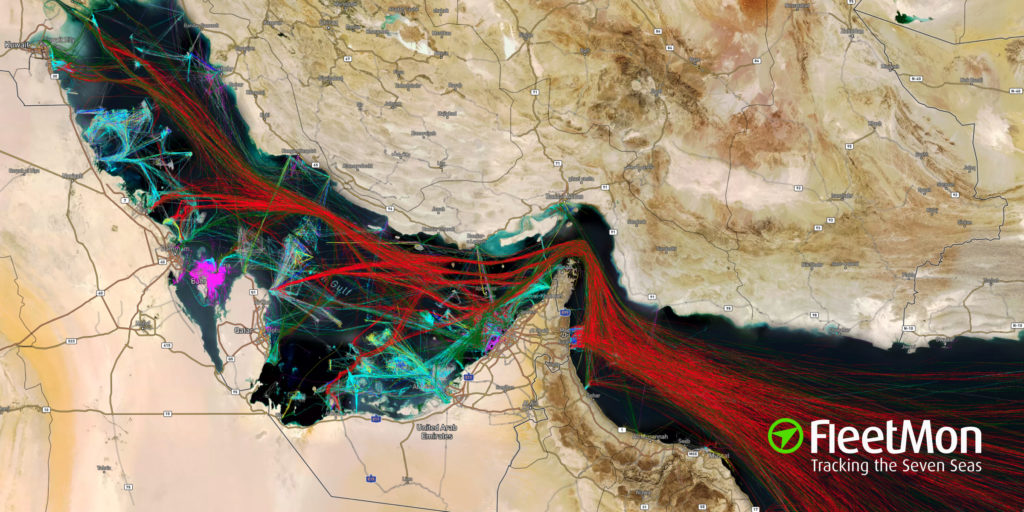 Vessel Density overlay in the Strait of Hormuz via FleetMon Explorer 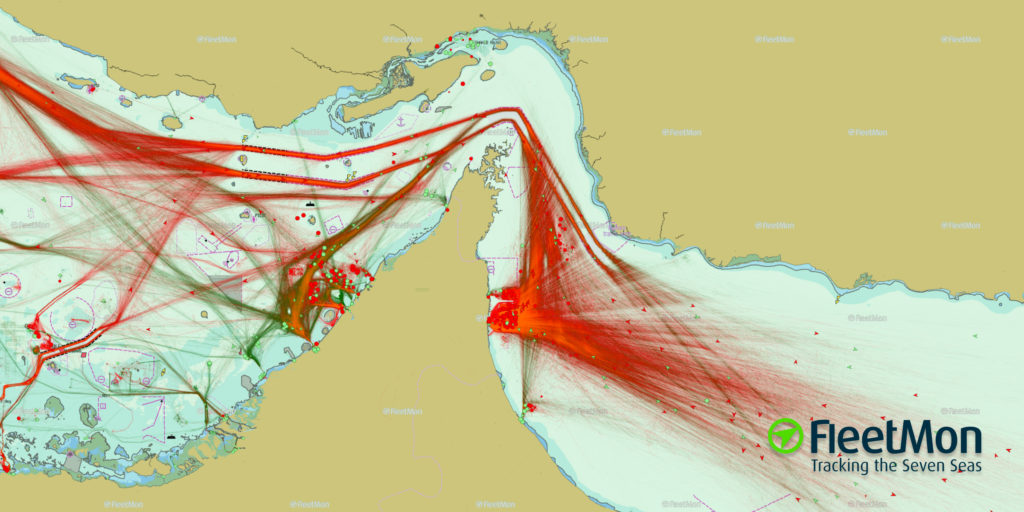 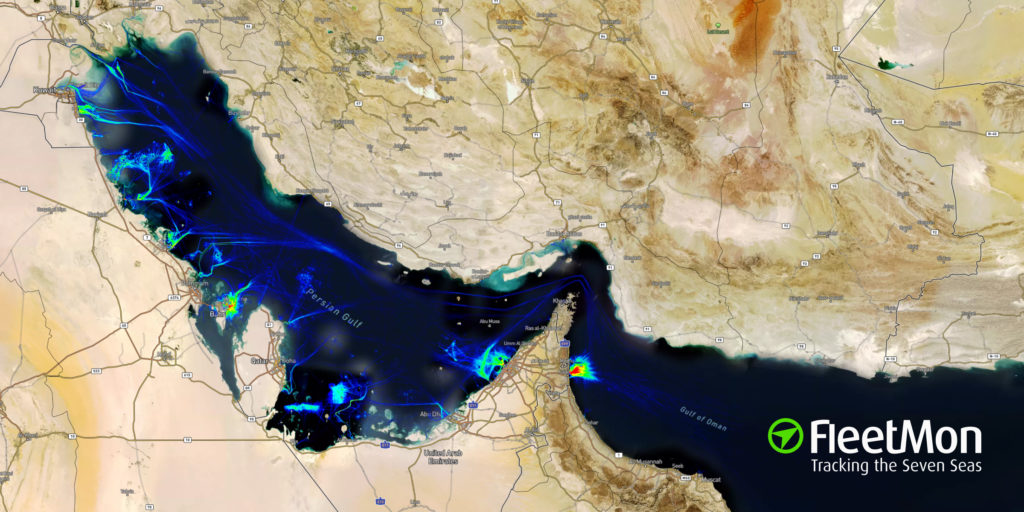