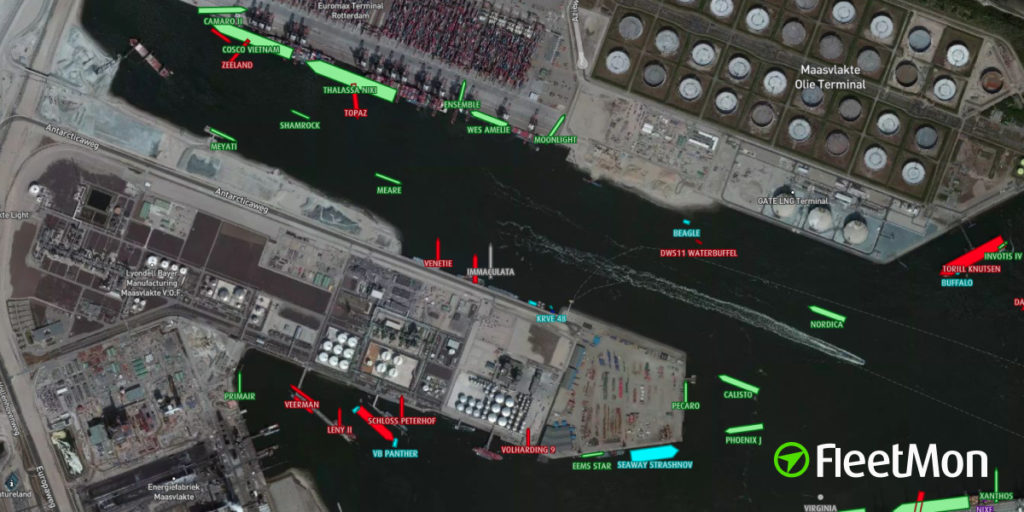 Port of Rotterdam with FleetMon Explorer

Climate change is shaping to be one of the most prominent threats so far in the 21th century. With the shipping industry being an inextricable part of global logistics, it contributes to about 18 percent of some air pollutants. The International Maritime Organization (IMO), with this in view has adopted regulations to reduce emissions of Greenhouse Gases (GHG). The directive in MARPOL annex 6 to reduce sulfur emissions to 0.5% is currently being enforced since 1st January 2020.

IMO plans GHG emission reduction of at least 50 % of the 2008 levels by 2050. With the global consensus gradually shifting in the favor of greener alternatives, governments and other private sector key players in the maritime industry are taking this in stride by innovations in shipping technology, more efficient resource management, and replacement of fossil fuels in favor of renewable sources. In the laundry list of objectives to achieve, perhaps the one of most important is the concept of a zero-emission port.

Such a port is powered mainly by renewable resources in order to fulfill its energy requirements, thereby reducing emissions. Goals such as these are quickly taking priority as it not only ensures a better future but not doing so would have financial ramifications.

Moving towards a better future:

Countries such as China, Japan, and the Netherlands, are spearheading the change towards zero emissions. China is the largest exporter of containerized cargoes; almost one third of the global cumulative. The country also houses seven of the top ten container ports in the world, e.g. Shanghai, Singapore, Shenzhen and Ningbo-Zhoushan. So naturally China has considerable influence over global maritime practices.

The Port of Rotterdam in the Netherlands is the largest in Europe by far and it alone saw a freight throughput of 469.4 million tonnes in 2019. This port is also one of the most ardent supporters of zero emissions and is leading by example.

Ship redesign is an integral part of achieving zero emissions. Ships that are battery powered and have no emissions are already being developed. A Dutch maritime company, the Port Liner is developing fully-electric container ships dubbed the “EC52” and the “EC110” in the Netherlands, China has completed tests of an electric cargo ship named the “Zhongtiandianyun 001” in the Changzhou port at the Yangtze River and the “Roboship Project”; a zero-emission electric tanker that is being developed by the e5 consortium in Japan, herald a new, eco-friendly era for the maritime industry and will reduce pollution considerably. The ultimate goal however is to remove emissions completely.

More immediate goals involve switching the fuel being used in power generation. Hydrogen-powered fuel cells, Liquid Natural Gas (LNG), Biogas, Ammonia, or high energy density batteries may be used for power generation. LNG and Biogas compatible vessels are already available, and for the most part, the two fuels can be used interchangeably in an LNG compatible ship. The reason LNG is not more widely used is the lack of infrastructure for the bunkering of Biogas or LNG. China is building such infrastructure for inland shipping purposes, and the construction of 280 LNG inland shipping vessels has already been completed. LNG boasts a reduction of about 25% CO2 emissions, 90% NOx emissions, and 100% SO2 emissions. Hydrogen used in Fuel cells on the other hand is completely emission-free and could be the fuel of the future.

The port of Rotterdam has joined the Hydrogen Council, a coalition of companies that are trying to use hydrogen for the energy transition from fossil to renewable. There is also a Japanese counterpart of the Hydrogen Council called the Kobe/Kansai Hydrogen Utilization Council; having a similar goal of developing a hydrogen supply chain in the Kobe/Kansai region. Japan however is considering ammonia as a fuel due to a few advantages it has over hydrogen. Ammonia is easier to store and transport, as opposed to compressing hydrogen which requires cryogenic temperatures. Ammonia is cheaper and has an already developed infrastructure as it is the second most-produced commodity in the world. An ammonia fuelled engine is being developed in the Copenhagen facility of MAN Energy Solutions. A fuel that has much lower emissions would cause a much smoother transition to other more radical energy solutions.

Efficient resource management is another way of saving energy. A smart grid that collects data from sensors all over the port and optimizes performance will save a considerable amount of energy. A sustainable logistic warehouse of 30,000 square meters is commissioned to be built in the port of Rotterdam.

What has already been achieved?

Looking at the work that is being done around the world and the change towards greener alternatives already being made, a zero-emission port is no longer a specious idea. Japan has implemented the EEXI (Energy Efficiency Existing ship Index) which ensures that emissions of ships do not exceed a critical level. Chinese authorities have made regulations to establish a Domestic Emission Control Area (DECA), a region in which only low sulfur fuels (less than 0.5%) may be used by ships. Initially, this applied only to ships that were at one of the three ports, the Bohai Sea, the Pearl River delta, and the Yangtze river delta. But now this applies to all ships in China’s territorial waters. As a result sulfur dioxide emissions by 33% in 3 years. There are also grants and incentives offered by governments, on 9th September 2020, the official presentation for Dutch National Fund for Green investments took place, a new fund with a valuation of 20 billion euros was provided. This would among other things provide impetus to sustainability in the economy as a long term goal.

There have been many breakthroughs in shipping technology such as the advent of hydrogen-powered drayage trucks, electric rubber-tired gantry cranes (the diesel counterpart burns 10 gallons per hour), these are already operational in long beach California. Electric tug boats have been developed in Japan by Tokyo Kisen Co. and e5 Lab Inc. and in the Netherlands by the Damen Group. There are also cases of older tugboats being retrofitted with new technology, the Goliah, a 1970’s build tugboat was repowered in 2017 to upgrade the tug engines to meet EPA Tier IV requirements.

More renewable energy sources such as wind farms, tidal and solar energy are being implemented, a fine example is the Eneco wind farms near the port of Rotterdam that supply as much as 20 MW to the port. The energy supplied by these can be used to replace the power generation units onboard the ships, reducing pollution, noise, and vibrations. The Heerema marine contractors are connecting their largest crane vessel SLEIPNIR to sustainable power at the port of Rotterdam. To understand the impact, this is comparable to shutting down 5000 diesel cars on a daily basis, reducing CO2 emissions by 15000 tons/year. China too is building shore power infrastructure for supplying ships with power while docked. 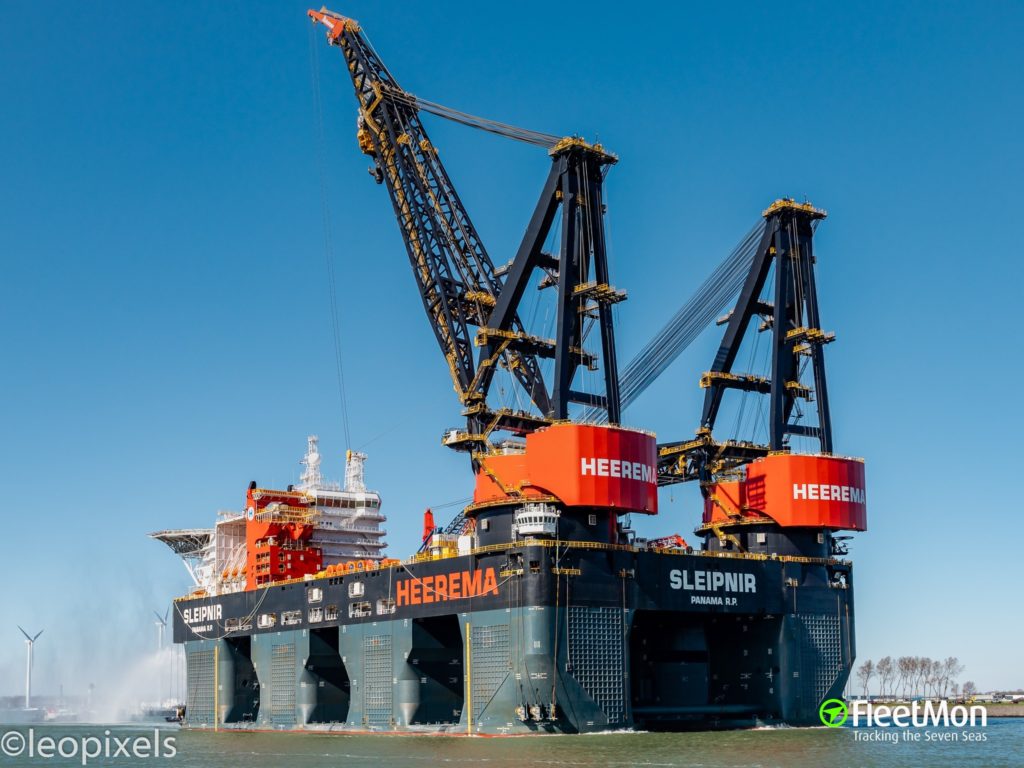 The march of progress as always is not without its challenges. Most pertinent of which is simply the lack of incentives for the private sector to embrace greener alternatives beyond compliance. Investment costs for building infrastructure and the development of new technologies are high and carry substantial risk; making it unattractive from a financial standpoint. Barring the financial obstacles there are also technological hindrances. Not all the vessels already in service can be retrofitted with new technology, most still run on marine diesel. The admixing of other fuels that have lower emissions with marine diesel may be a viable solution for now, but not for long. Fitting of high energy density batteries aboard the ship also only covers a small percentage of the total energy requirement. The larger the vessel the lower the proportion.

Although green initiatives may seem like unnecessary expenditures in the short run, recently appearing climate change, acid rains, cancers, and other diseases paint a very real picture of the threats we would face if bold measures are not taken soon. Zero-emission ports are not only environment friendly but inspire other organizations and people to adopt “green” practices; which is the only way to avoid the disasters looming ahead.

Zero-emission ports: Towards “greener” pastures
Did this answer your question?