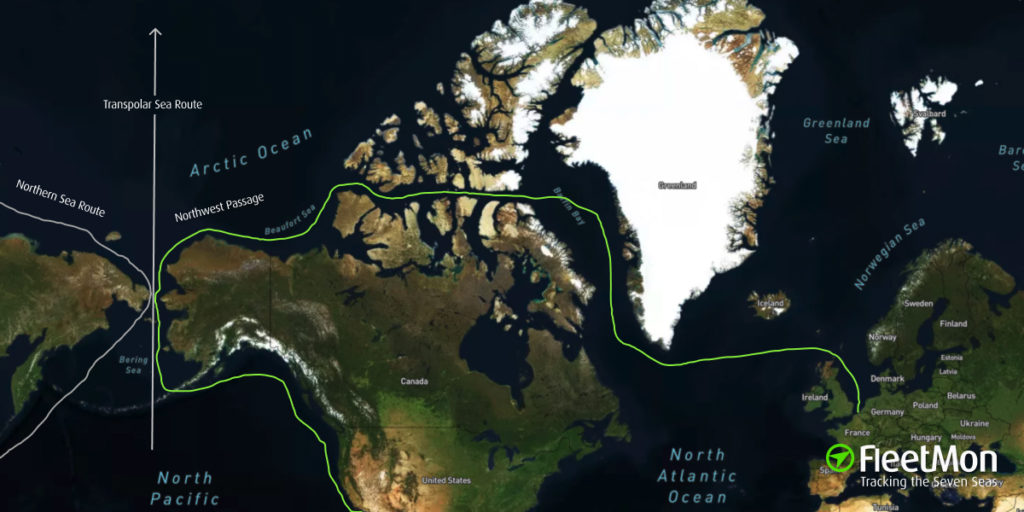 Arctic shipping routes are maritime paths used to traverse the Arctic ocean. They have long been sought, even since historical times as a way to substantially reduce the travel distance between ports. But these routes cannot be traversed readily due to the presence of ice at the Arctic. With the advent of global warming and associated climate change phenomena, the Arctic ice is melting at a record pace. While this is a grim foreshadowing of things to come, a few countries stand to make a tidy profit from this, namely from the ice being replaced by navigable water. But even for these countries, do the benefits really outweigh the costs? 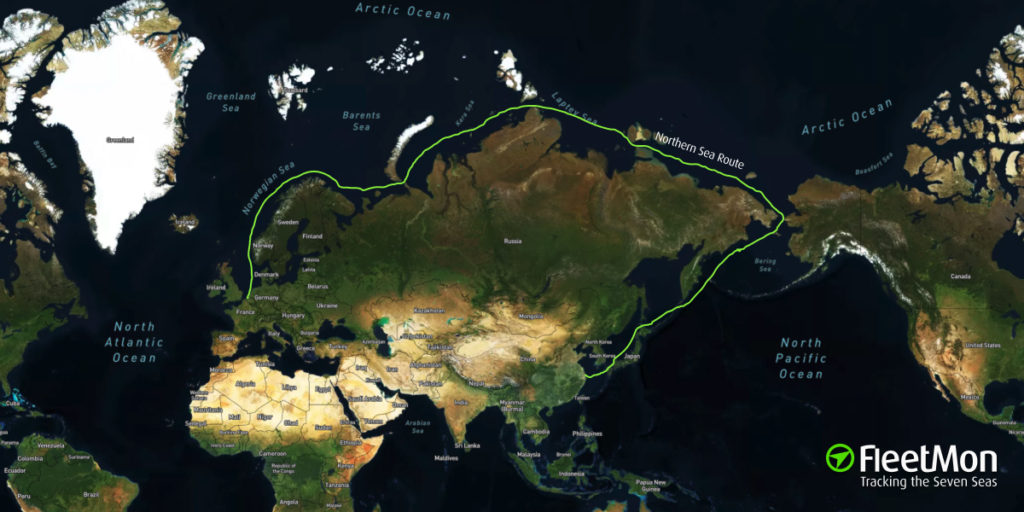 The Arctic sea route back in time

To put things in perspective, a trip from Yokohama, Japan to Western Europe spans 14,448 nautical miles traditionally, but through the Northeast passage it spans 7010 miles, London to San Francisco that would be 14000 miles, effectively becomes 5000 miles. Traversing these routes would provide tremendous savings in fuel. This could essentially revolutionize the shipping industry. So why hasn’t this happened? These advantages are currently offset by a few disadvantages. The passages are frozen most of the year and even during the summer an icebreaker or a ship with a sufficiently reinforced hull is required. The conditions in the Arctic are harsh and treacherous, the Bering sea has storms that are so powerful that a ship cannot simply weather it. The ports are few and rescue facilities aren’t nearly sufficient. There are also geopolitical issues between countries and rising tensions hindering the route from being developed.

However the proverbial tide is turning, rising global temperatures are already causing the ice to melt earlier in the summer, it is projected that by 2030 to 2050, the ice will melt to such an extent that even the transpolar route through the center of the Arctic Ocean will be a viable option. No more icebreakers or tight coordination with coast guard will be needed. This will be the biggest maritime shortcut in the world, drastically reducing fuel costs and travel times.

Cashing the melting ice of the Arctic

The Arctic routes may be operating at only a small fraction of their potential, but even now cargo of various sorts is sent through it, the most prominent of which is Natural Gas, shipped from Russia to South Asian countries. The Yamal project in the Yamal peninsula is one of the many projects concentrated along the Russian coast effectively exploiting the natural resources present on the northern coast of Russia. The natural gas when liquefied is shipped through vessels such as the CHRISTOPHE DE MARGERIE, one of many in the growing fleet, to China, which buys natural gas to reduce its reliance on coal. They take the Northeast passage during the summer and traverse the Northwest Passage through the Bering strait in winters. Nickel and copper are also shipped by NORILSKIY NICKEL, a Russian mining and smelting company. The ZAPOLYARNYY, the NADEZHDA, and the MONCHEGORSK are only a few of many in the company’s growing fleet. Taking the Northern Sea route yields them almost a twofold gain in fuel savings, poising them to accelerate their mining efforts.

The most recent addition to the traffic, however, are cruise ships. Tourism here was pioneered by the vessel named the LINBLAD EXPLORER in 1984. Cruise ships such as the MS BREMEN which is moored in Rostock, Germany and headquarter of FleetMon at the moment became one of the first of their kind to sail the whole Northwest Passage in 2006. The largest cruise ship to ever navigate the Northwest passage was the CRYSTAL SERENITY, starting on 10th August 2016, the ship sailed to New York City from Vancouver in 28 days with 1700 passengers plus crew. In the following year, the cruise ship passed through the same route a second time. Backlashes over concerns such as the cost of rescuing passengers here and the effect such a large ship would have on that environment prevented more journeys.

The melting Glaciers possess a natural beauty which the tourism industry leverages to great effect. The allure of seeing a dying world that may not be present for long attracts tourists in droves. In 2018, 100,000 companies offered iceberg cruises from Greenland alone.

The geopolitical scenario in the Arctic

Scientists and researchers take ships such as the Research Vessel POLARSTERN regularly to the Arctic. The vessels’ most recent expedition is the MOSAIC (Multidisciplinary drifting Observatory for the Study of Arctic Climate), a 140 million euro project led by a consortium of polar research institutes. The Germany-flagged vessel is spending a full annual cycle in the arctic and is resupplied only via aircraft and icebreakers. This vessel which was renovated in 1999 – 2001 serves as a home for over 100 researchers, technicians, and crew members. The purpose of the expedition is to conduct research on hitherto unobserved climate processes that will provide a more holistic view of the arctic by observing how the atmosphere, ocean, sea ice, ecosystem, and biogeochemistry connect to each other. This will radically improve the climate models and our understanding of the arctic climate system. The findings of scientists are alarming, namely that the ice at the poles is melting and we are already past the tipping point of no return.

However, this will also make vast deposits of natural resources such as petroleum and natural gas available. The USGS estimates that there are 90 billion barrels of oil, 1669 trillion cubic feet of natural gas that are in the Arctic region. Countries like the US, Canada, and Russia are obviously gearing up, but even unlikely contenders such as China are also ever-present. Research and development are in full swing, recently developed nuclear-powered icebreakers such as the 50 LET POBEDY give Russia a competitive edge in the Arctic. Russia is also renovating old soviet era military bases near the coast leading to heightened tensions in the neighboring NATO countries. The US, in turn, has increased its coast guard and Air force presence in the Alaskan coastline.

There is another challenge concerning the Northwestern Passage: a large part of the Northwestern Passage lies in the Canadian archipelago, Canada claims this to be its territory and has not declared it an international waterway. No country had contested this till now as there was no reason to do so, however, this gives Canada the power to hinder the ships of some countries and let the others pass. The United States and Canada which coexist as allies and trading partners have had this as a dispute for a long time now.

This progress and the opening of new ports, however, is displacing the indigenous people both in northern Russia and in Alaska which mostly rely on hunting and gathering to survive. With the rise in global temperature islands such as the Maldives get a little bit more submerged every year. The ice caps are melting fast and the delicate ecosystem in the Arctic cannot keep up. The effects are undeniable and the exploitation of the Arctic is just beginning.

Arctic Shipping: The new Gold Rush
Did this answer your question?