All Collections
FleetMon Maritime Knowledgebase
Which Vessels Emit the Most GHG?

Which Vessels Emit the Most GHG?

Greenhouse gas (GHG) emissions from commercial shipping are increasingly grabbing the headlines. Like aviation, shipping had been excluded from climate negotiations because it is an international activity, while both the 1997 Kyoto Protocol and the 2015 Paris Agreement involved national pledges to reduce greenhouse gases. But as ships move around 80% of global trade in volume terms, there is a growing consensus about the need to tackle shipping’s CO2 emissions.

Although ocean freight is a greener mode of transport than road, rail or air, the shipping industry has for years been playing an active role in the battle against climate change. As the Secretary-General of the International Maritime Organisation wrote in the foreword to the Third IMO Greenhouse Gas Study 2014, “in recognition of the magnitude of the climate change challenge and the importance of global action to address it, we … have been energetically pursuing the development and implementation of measures to address GHG emissions from international shipping.”

While numerous estimates of overall GHG emissions from international shipping do exist, any analysis of emission levels from ship types suffers from a lack of up-to-date data. The only comprehensive source, that Third IMO GHG Study, was published five years ago and details CO2 emissions by ship type for the period 2007-2012. Work on a Fourth IMO GHG Study has begun but is far from being finished. The table below, taken from the 2014 Study, details CO2 emissions by ship type for 2012, calculated by the so-called bottom-up method*: 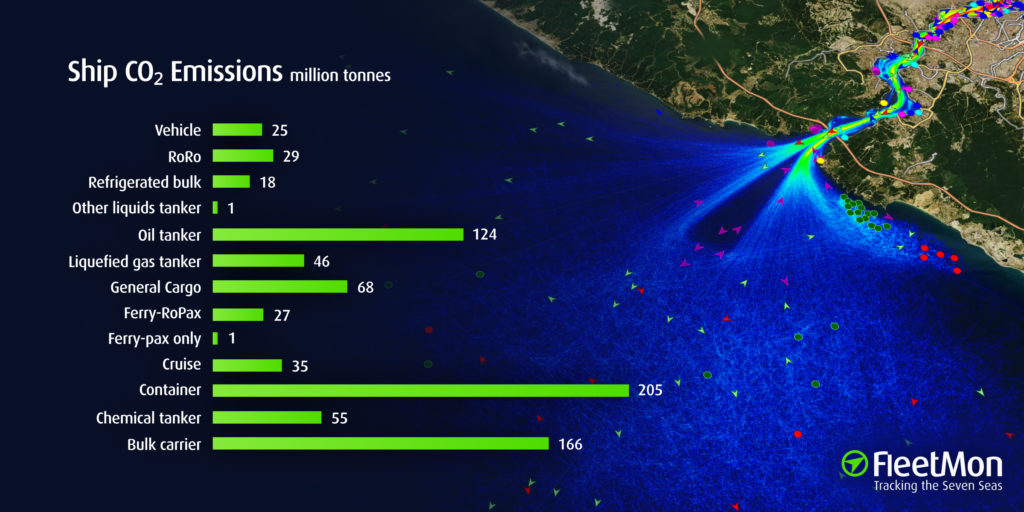 As the above figures show, containerships, tankers and bulk carriers were responsible for around three-quarters of total emissions in 2012. That is hardly surprising as these three ship types account for the lion’s share of the 50,000 ships on the Seven Seas. Despite the lack of up-to-date evidence, there is little reason to doubt that the Big Three are still responsible for a similar share of CO2 emissions. Cruise shipping has grown significantly since 2012 but these vessels are generally the greenest of ship types and their share of overall CO2 emissions is unlikely to have risen by much.

Keeping tracks on 50,000 ships is no easy business. Besides carbon dioxide, numerous other emissions such as nitrogen oxide, sulphur oxide, particulate matter, oil, ballast water, bilge water, and sewage also need monitoring. As sulphur oxide (SOx) is among the most harmful, Port State Control (PSC) authorities have concentrated most of their efforts on this gas. It also happens to be the easiest pollutant to monitor when a ship is in port. Inspectors simply board a ship and take a fuel sample. By testing the fuel’s sulphur content, a certified lab can say whether a ship is complying with regulated limits. More recently, PSO authorities have been experimenting with high-tech tools to sniff out polluters, e.g. sensors mounted on aircraft or drones to fly through ships’ exhaust plumes and measure emissions in this way. But these tools are not yet in widespread use.

Unfortunately, the in-port fuel test tells us nothing about emissions on the high seas or those that are not regulated at all, e.g. CO2. Luckily, smart technologies are coming to the rescue. By coupling AIS-based data on ships’ locations and speed with parameters such as engine power and fuel consumption, insights can be gained into a vessel’s carbon emissions. Satellites are also coming into play. The European Space Agency has been asked by the EU to design a satellite for macro-monitoring CO2 emissions. This carbon-tracker should be in orbit sometime in the 2020s.

Which vessels emit the most GHG?
Did this answer your question?